President Recep Tayyip Erdoğan attended a ceremony held at Çanakkale Martyrs’ Memorial on the occasion of the March 18th Martyrs’ Day and the 102nd anniversary of the Çanakkale Victory. 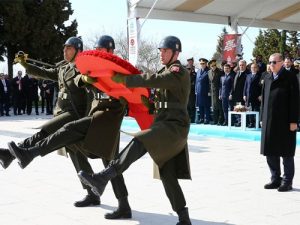 After President Erdoğan laid a wreath at the memorial, a moment of silence was observed and the Turkish national anthem, the Independence March was sung.