Turkey has increased its installed power capacity for electricity generation to 73,147 MW in 2015, up from 38,843 MW in 2005. The sector anticipates increasing growth in order to meet the government target of 120,000 MW of installed power by 2023, the centennial celebration of the Republic of Turkey. 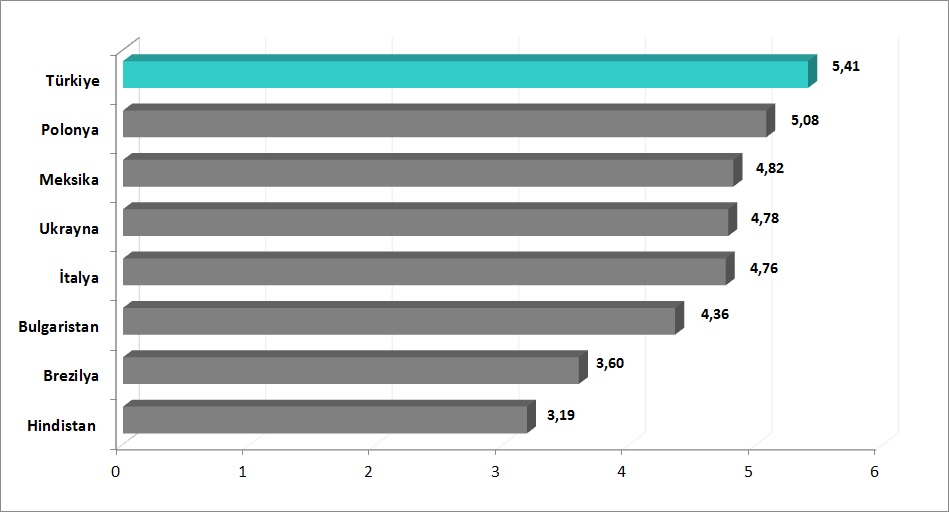 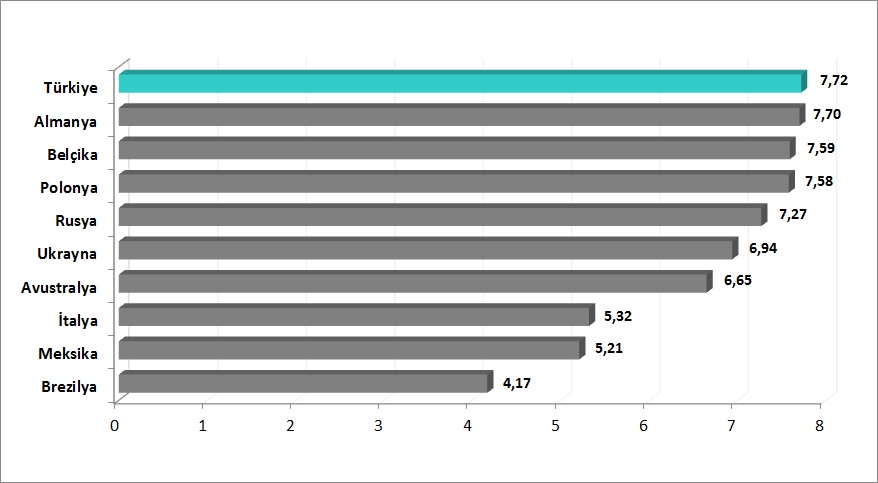 One of Turkey's key advantages is its logistics industry, which has undergone significant development since its entry into the EU Customs Union. The industry’s infrastructure, a unique combination of geographic, physical, and corporate characteristics, makes it one of the key attractions for potential investors, as seen below:

Turkey's proximity to major markets, such as the CIS, the Middle East, and North Africa, means that approx. 1.6 billion consumers can easily be reached.
Turkey has a pivotal role in connecting Pan-European transport corridors to Central Asia. Additionally, the Mediterranean basin, to which Turkey is a natural conduit, has gained greater prominence in both East-West and North-South connections.
Turkey has invested TRY 253.3 billion in transportation and communication infrastructure between 2003 and 2015, of which TRY 23.1 billion has been realized as PPP investment.
The national road and railroad networks are completely integrated into the Eurasian infrastructure. The Silk Road Railway project will ensure a uniform rail route between Europe, the Middle East, the Turkic Republics, and the Far East through Turkey. Regular truck transportation and Roll-on/Roll-off (Ro-Ro) ferry routes are continuing to add to the logistic services capacity.
Rapid expansion of a high-speed train network means Turkey is now 6th in Europe and 8th in the world in terms of length of high-speed track. Turkey aims to have a combined 12,000 km of high-speed and fast train lines by 2023, and a combined 18,000 km of high-speed and fast train lines by 2035. These projects include:

Law 6461 regarding the liberalization of railway transportation in Turkey was enacted on May 1 , 2013. Full application of the law in the railway market is being expected by the end of 2016 following the dissemination of all secondary legislations.

Efficiency in the Distribution Infrastructure for Goods and Services
(0: Inefficient – 10: Efficient) 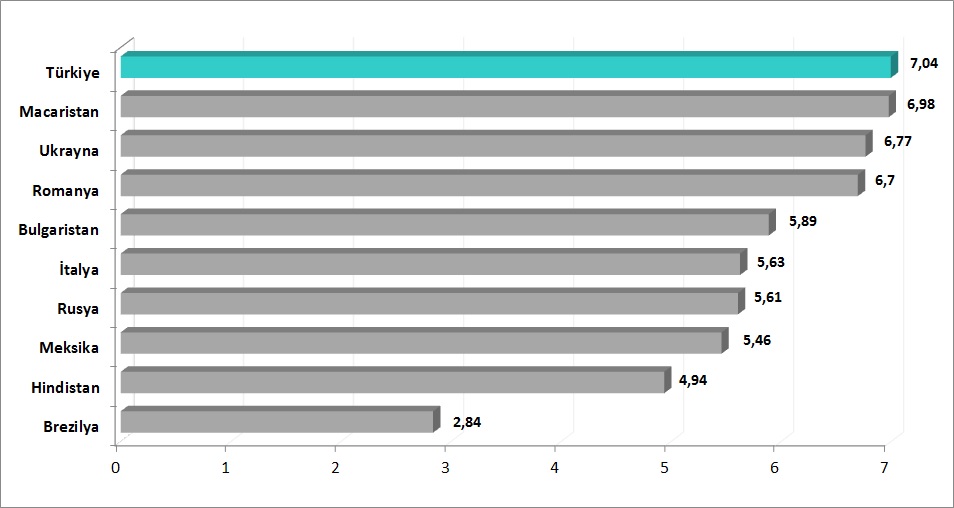 Marmaray: Marmaray is an undersea railway tunnel linking the Asian and European sides of Istanbul, and its first phase has been in operation since October 2013, the 90th anniversary of the Republic of Turkey. Marmaray makes a significant contribution to Istanbul’s railway network, with connections to the Istanbul metro and the high-speed railway line between Istanbul and Ankara. Marmaray has carried more than 120 million passengers since its inauguration.
Third Bosphorus Bridge and North Marmara Highway: Istanbul’s third Bosphorus bridge (Yavuz Sultan Selim Bridge) links Istanbul’s European and Asian sides. It was designed as a hybrid bridge, and as such holds the distinction as the world’s widest and longest combined road and rail bridge. The bridge is part of the North Marmara Highway project, stretching from Adapazari, Sakarya to Tekirdag. Once fully operational, the project will further ease the burden on the existing two bridges spanning the Bosphorus and provide a transit corridor for freight transportation that bypasses the busy city center. The project has created around 6,000 jobs and the construction activities have added an annual TRY 1.75 billion to the economy.
Eurasia Tunnel: The tunnel enables motor vehicles to travel between Asia and Europe via a highway tunnel running underneath the Marmara seabed. The 3.34 km-long two-deck undersea tunnel will have a daily capacity of 120,000 vehicles and will significantly cut the distance between Kazlicesme on the European side and Goztepe on the Asian side of Istanbul. It is expected to be open by the end of 2016. The expected fuel saving with the tunnel is around 38 million liters annually. The project, with an employment of 1,800 people, will also decrease carbon emissions by 82,000 tons a year.
Third Airport in Istanbul A joint venture of Turkish companies won a tender for the third Istanbul airport in May 2013. The companies will pay the government EUR 22.1 billion plus taxes for the right to operate the airport for 25 years starting in 2017. The project, which is expected to cost around EUR 33 billion with all investments and annual rent, is the largest project in the country so far. Located on the northwest of Istanbul’s European side, the 150-million-passenger capacity air terminal will be connected to the Third Bosphorus Bridge via the North Marmara Highway. The airport will play a vital role in making Istanbul a global air travel hub. The airport’s first stage will incorporate two runways and a terminal with an annual capacity of 90-million passengers. This first stage is due to be operational in 2018.
Gebze-Orhangazi-Izmir Highway and Izmit Bay Bridge: The project shortens the overland travel distance between Istanbul and Turkey’s third largest city, Izmir. This project features the 3-km long Izmit Bay Bridge (Osman Gazi Bridge), the fourth largest suspension bridge in the world.
Three-Storey Grand Istanbul Tunnel: The three-storey subsea tunnel will connect Istanbul’s Asian and European sides under the Bosphorus and will feature a railway sandwiched between two highways. The 6.5-km-long tunnel will sit 110 m below sea level and will be the first of its kind in the world. The tunnel will not only reduce the traffic load on the bridges spanning the Bosphorus, but will also maximize time savings.
Canakkale Suspension Bridge: This bridge will be located at the western end of the Sea of Marmara, close to the province of Canakkale. It will span the Dardanelles and will become the longest suspension bridge in the world, with a center span longer than 2 km once completed. The bridge will be part of the Canakkale-Tekirdag-Kinali-Balikesir Highway and feature three lanes in each direction as well as train tracks.
Canal Istanbul: The canal will be an artificial sea-level waterway that will run parallel to the Bosphorus, connecting the Black Sea with the Sea of Marmara. 47 km in length and 150 meters wide, the canal will provide relief to naval traffic in the Bosphorus, particularly tanker traffic. The canal will be able to handle 160 vessels a day and is set to offer many investment opportunities since there will be huge growth potential in its immediate vicinity.
Gebze-Halkali Commuter Rail Upgrading: The renovated train links that will connect Istanbul’s outskirts on the European side with those on the Asian side are expected to be completed in 2018. The EUR 1 billion project has created jobs for over 800 people and has contributed around TRY 500 million to the economy.
Baku-Tbilisi-Kars Railway: This railway will be the third largest project made jointly by Azerbaijan, Georgia and Turkey, following two major energy pipeline projects. Once the railway project is complete, the line will be able to carry a total of 1 million passengers and 6.5 million tons of cargo annually. The capacity of the railway is expected to increase to 3 million passengers and 17 million tons of cargo by 2034. The project has created 8,237 jobs and has made a contribution of around TRY 988 million to the economy so far. A test drive of the railway line is slated for the end of 2016.
Ovit Tunnel: The construction of a new highway tunnel in the northeastern region of Turkey, which is planned to be one of longest tunnels in the world, is invigorating the commercial prospects of local investors, both regionally and internationally. The tunnel is set to cut through Ovit Mountain, which is located between Ikizdere, a district in the northwestern province of Rize, and the eastern province of Erzurum’s Ispir district. The dual-tunnel project will eventually exceed 14.7 km, including the linking roads around it. Construction of the project is expected to be finalized by the end of 2017.

With regard to the maritime sector, important projects include the Candarli Port on the Aegean Sea, the Mersin Second Container Port on the Mediterranean Sea, and the Filyos Port on the Black Sea. With these projects, one in each of the three seas surrounding Turkey, Turkey’s current container handling capacity is expected to triple.